I do have a slight fear of flying, but once in the air I find comfort in watching the landscapes change. When flying from D.C. to Des Moines for a BIO event in 2019, it felt like we were flying over a quilt with various shades of brown and green.

The brown is what caught my attention the most. It did not resemble the stuff you buy at the hardware store. It didn’t look dark brown and crumbly. It looked light brown and dry. 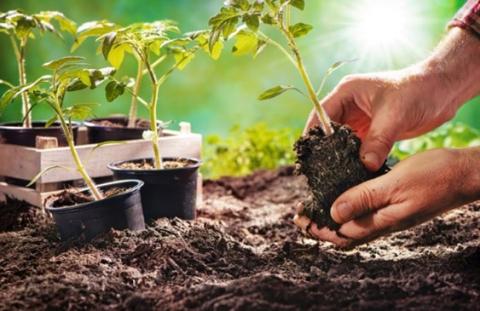 In a recent segment on NPR’s Morning Edition, they explained why.

To summarize, a good portion of topsoil—the black fertile dirt that looks exactly like what you buy at the home and hardware stores—has eroded from farms across the country. This layer of dirt is extremely important for growing crops because it's full of microorganisms and organic carbon.

As crops are planted and harvested year over year, this layer can be lost from tilling and natural erosion.

However, biotechnology provides a solution.

Plants and crops are good at capturing carbon from the atmosphere. It is what they do naturally. The problem is when crops are harvested, their roots—which is where this carbon is stored—are usually pulled up too.

But researchers at the Salk Institute of Biological Studies are using genetic engineering to develop plants with bigger, deeper roots which will stay in the ground after the crop is harvested.

Over time these roots will break down slowly, helping to replenish the soil with carbon.

This carbon capture can help the planet and farmers.

If the United States were to establish a carbon incentive program—which seems inevitable as carbon has become one of the newest hot commodities—farmers could gain a new revenue stream.

This industry of carbon offset markets is primed to grow exponentially in the coming years. In fact, according to the Taskforce on Scaling Voluntary Carbon Markets, the carbon offset market will need to grow by at least 15-fold by 2030 to meet the ambitious climate goals set by an ever-growing list of corporations.

That means existing farmlands will need to part of the program.

So, if we embrace breakthroughs like genetic engineering not only can farmers be part of the climate solution, but we could also restore the health of our land and the color of our landscape.