Reviewing the drug class of 2011

January 25, 2012
The drug class of 2011 was larger than the past few graduating classes. We count over 30 new "innovative" drugs found among the list of FDA approvals last year. This is in contrast to the 20-something range of the past few years. On the list are some clear breakthrough treatments and a few glimpses of "the future of biotech". The specific drugs are listed further below, but first a big picture view: 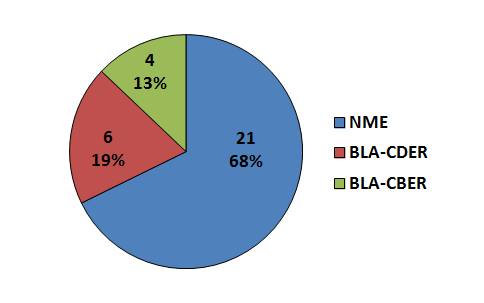 Ten of the approvals were for biologics, six of which came through CDER. Of these six, three were antibodies, two were recombinant fusions, and one was a PEG linked enzyme. The other four biologics came through CBER. The CBER approvals contain blood or serum derived therapies such as the first blood cord stem cell therapy (Hemacord), a mixture of horse derived antibody fab domains for scorpion venom (Anascorp), and an autologous cell therapy for wrinkles (LaViv). One recombinant blood protein was approved by CBER, rFactor XIII (Corifact). 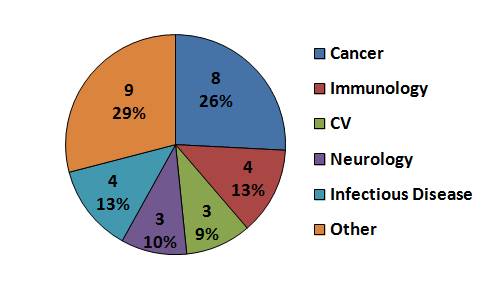 A range of disease areas were addressed by the the approved therapies. Cancer, being the most prevalent with eight approvals. Two of the small molecule new molecular entities (NMEs) are kinase inhibitors for cancers that were approved along side companion diagnostics. We expect to see more of this in the future, as patient identification and responder selection gains more traction in the industry, and regulators welcome the concept. News this week from Biogen, regarding Tysabri, underscores the importance using diagnostics for patient stratification even for approved drugs. News that Roche has bid ~$6B for Illumina also illustrates the imperative for drug developers. Examples of companion diagnostic for negative/positive responder identification, as well as safety profiling, will likely become a major theme in biotech in coming years. 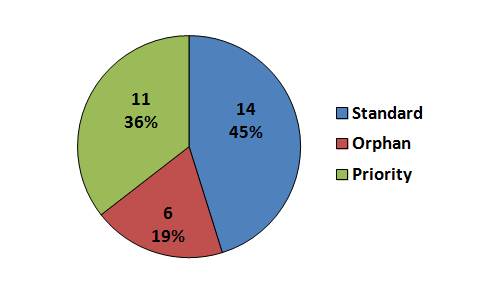 The drugs slated for fast review and decision accounted for over 50% of the approvals. Orphan designated drugs made up a fifth of these approvals, and over a third were priority approvals.

Counting approvals that are new and "innovative", is not as straight forward as copying and pasting from fda.gov. First, we only include drugs that are being approved for the first time, for a first indication. Second, we do not include imaging agents in our list, like the FDA did in their fiscal year list back in November (note we use a calendar year here). Third, unlike lists published elsewhere online that only count CDER BLA approvals, we include certain BLAs approved via CBER. Fourth, we exclude new formulations, and combinations. However, we do include chemically modified forms of exisiting drugs, such as this year's addition of PEG to arginase in Erwinase (chemically like what Amgen did for Neulasta or Celltech did for Cimzia). As another example, two drugs with Gabapentin were approved in 2011, but only one was chemically unique (the prodrug Horizant) and made it on our list. The other, Gralise is a once daily reformulation.