A Scientist Pope and High-Tech Catholicism

March 20, 2013
The USA Today ran an op-ed authored by John Rigolizzo, a New Jersey farmer and a volunteer board member of Truth About Trade & Technology: 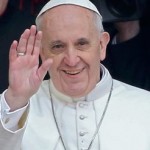 "As Catholic cardinals selected Pope Francis in Rome, we watched an ancient church at its most medieval: obedient to tradition, cloaked in secrecy, and waiting for white smoke. The papal conclave appeared positively anti-modern. Yet in another sense, the Vatican stands in the vanguard of science and technology. It's one of the world's strongest supporters of genetically modified (GM) crops.

"Many of us are still trying to learn about the new pontiff. We know a few things already. He is not only a man of faith, but also science – a chemist, by training. He's from Argentina, whose farmers rely heavily on GM crops. And he professes a concern for the poor, who have the most to gain from 21st-century food production...

"In 2009, the Pontifical Academy of Sciences, which advises the Holy See on scientific questions, organized a conference on farm biotechnology. It soon came out with a ringing endorsement: 'There is a moral imperative to make the benefits of genetically engineered technology available on a larger scale to poor and vulnerable populations who want them, and on terms that will enable them to raise their standards of living, improve their health, and protect their environment.'

"Ever since I started growing biotech crops more than a decade ago, I've believed much the same thing. I saw the outstanding benefits of these plants with my own eyes: All of sudden, we were able to produce more food on less land. This was great for farmers, consumers and conservation.

"The Pontifical Academy of Sciences understood the possibilities. Although its report didn't amount to an official church teaching, it gave moral weight to the case for GM crops.

"'We urge those who oppose or are skeptical about the use of genetically engineered crop varieties and the application of modern genetics generally to evaluate carefully the science, and the demonstrable harm caused by withholding this proven technology from those who need it most,' said the academy...

"When it comes to the technology of food production, the Vatican remains true to its oldest principles while also standing at the forefront of science."
More on This Topic