The Subcommittee on Consumer Protection and Commerce of the Committee on Energy and Commerce is set to examine the U.S. patent system this morning. Ahead of the hearing – and in honor of #ThrowBackThursay – we are resurfacing a piece by BIO’s Tom DiLenge that helps debunk some of the most common myths surrounding intellectual property and the biopharmaceutical industry.

In an opinion piece published at CNBC.com, Tahir Amin — co-founder of I-MAK — blames the U.S. patent system for our country’s “high drug prices.” The author commits many of the same errors we see regularly from critics of the biotech industry.

Setting aside Amin’s flawed approach to prescription drug pricing, his views on the patent system and the prescription drug ecosystem are severely skewed and perhaps more dangerous to the future of biomedical innovation.

Patent “evergreening” is a red herring. Amin and others claim that brand name drugmakers are gaming the system by receiving additional patent protection for frivolous add-on inventions. But the facts tell a different story. According to academic studies, there are on average only 2.5 “secondary” patents per drug, and more than 75% of these secondary patents were filed before the drug received FDA approval. These are not “new patents on old drugs” as critics want us to believe. What’s more, these patents usually relate to valuable clinical improvements, such as supplying a drug in a special dosage form to patients with special needs.

Generic medicines are coming to market at a record rate. If there is some coordinated effort by the biotech industry to block generic competition, it isn’t working.

According to representatives of the generic drug industry, 89% of all drugs dispensed in the United States are generics. As OECD health statistics show, this far exceeds the share of generics sold in other countries, such as the United Kingdom (83%), Germany (81%), Canada (73%) and France (30%).

Meanwhile, FDA Commissioner Scott Gottlieb recently praised his agency for approving the “highest ever number of generic drugs” last year (more than 1,000 generic approvals). Once generic medicines are approved, they are gaining greater market share more quickly than ever before. And according to a report in the Journal of Medical Economics, the time it takes for a generic medicine to reach the market has remained steady for the last two decades. 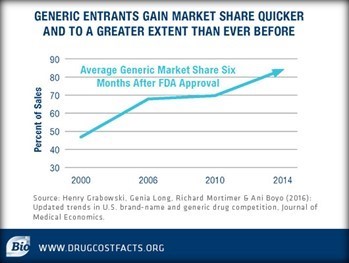 I-MAK wants innovation, but wants to punish innovators. How else to explain I-MAK’s attempts at filing patent challenges against the company that recently discovered the first cure for hepatitis C? Amin balks at the cost of the cure, but omits several important facts.

He cites the list price of the cure, but any honest review of the facts will show that this is almost never what the drugmaker makes or what patients pay. That’s because every day drugmakers provide significant rebates off the list price of the drug to help promote broader patient access. These savings reached an estimated $154 billion in 2017, and the question is whether insurance companies and middlemen are passing the savings along to patients.

Competition from other innovators is driving down prices, and the cure for hepatitis C is a great example. Less than two years after the first hepatitis C cure hit the market, the average discount to payers was roughly 50% due to intense market competition from other drugmakers who soon released their own innovative cures. Today, Hepatitis C patients have multiple medicines to choose from at a fraction of the cost of the first treatment and a more than 90% chance of beating the disease.

Third, and perhaps more important, the costs associated with not curing hepatitis is far greater and more devastating. Before a cure for hepatitis C hit the market, the cost of treating the disease ranged roughly between $155,000 and up to $489,000. Today, the cost of care for a patient with the disease is approximately $60,000. Thanks to biomedical innovation, a cure for a deadly disease is saving lives and saving money throughout the health care system. Yet insurers still discriminate against those who need treatment, despite the benefit it provides patients and our health care system more broadly.

Our nation develops more new medicines than the rest of the world combined (57% of all new medicines to be exact), thanks in no small part to a patent system that rewards and protects innovation. These are facts Amin appears willing to ignore, because it fits well with his organization’s mission of paying lip service to biomedical innovation while pursuing an agenda that threatens the discovery of new cures and treatments. Patients and policymakers: Beware.