March 24, 2017
Click here for coverage from Tuesday's programming at the 2017 BIO Asia International Conference. Missed the event this year? Sign up to receive updates about BIO Asia 2018.

Economic and Patient Impact of the Biomedical Research Community in Japan 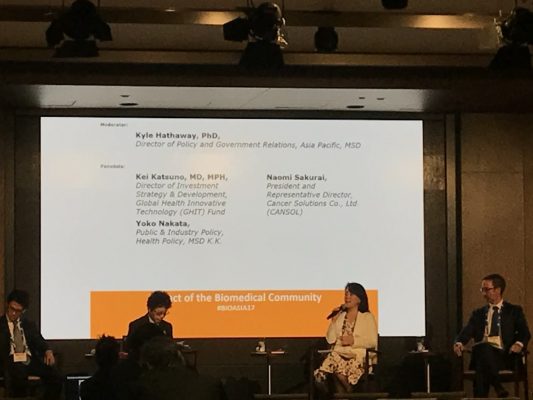 The second day of the BIO Asia International Conference began with a panel titled, “Economic and Patient Impact of the Biomedical Research Community in Japan”. The panel was moderated by Kyle Hathaway, PhD, Director of Policy and Government Relations, Asia Pacific, MSD, and featured the following panelists:

Hathaway asked the audience if anyone was aware of how many scientific researchers work in the life sciences in Japan. The answer: more than 100,000 researchers. There have also been 13 noble laureates from Japan, with 4 in medicine. That’s a tremendous amount of human capital that Japan is bringing to solve our global health challenges.

Hathaway asked how cancer research has changed over the past decade. Sakurai, a cancer survivor, and leader of a patient advocacy group, answered that there is now a big movement in Japan to value patients’ voices, and she works to help cancer survivors to address and communicate more widely the many challenges they face. Patient education of the medical and support options available to them is something she would like to see more of in Japan, she said.

Nakata discussed the issues that Japan’s healthcare industry groups face, and how they have responded so far. Japan has issued a 2035 health policy statement, which addresses what the nation will do in the year 2035 when 1/3 of the Japanese population will reach the age of 65.

Katsuno discussed what GHIT is working on, and details about how the product funding process operates as a public-private partnership model, particularly to fight neglected tropical diseases. He believes  this model could be effective in other areas moving forward as well.

Japan has shown that when faced with a healthcare challenge, it has been swift to respond, Hathaway, said. He gave several examples of times when policy changes and new research initiatives were created in response to such challenges. A current issue Japan is facing in healthcare is Alzheimer’s disease, which costs Japan 14.5 trillion yen in direct and indirect costs. Globally, the cost is estimated to be between 600-800 billion dollars. Japan will be instrumental in helping solve diseases like Alzheimer’s, cancer, and others for patients around the world. 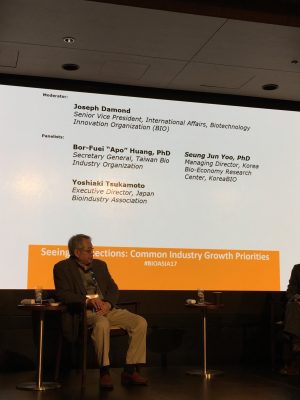 Japan has an impressive amount of human capital in the form of PhD-level academics, noble laureates, and research institutions. The challenge has been commercialization of the knowledge produced by the many Japanese academics and researchers. The session explored the differences in the Japanese, Taiwanese, and Korean research funding traditions and regulatory environments, as well as the commonalities in priorities for supporting the growth of biotechnology companies and therapeutic pipelines.

Huang discussed the status of current clinical trials in progress in Taiwan, provided an overview of the investment landscape, and identified recent IPOs.

Yoo provided an overview of what Korea is doing to develop its healthcare industry. One challenge he identified is the size in of the healthcare industry in comparison to the rest of the Asia, which makes up about 2% of the industry in Asia. Korea aims to increase this by increasing business development collaboration with other nations worldwide.

Damond asked if the Japanese start up structure is likely to grow, or if there will be changes. Tsukamoto discussed recent investments in Japanese universities and said that there are increasingly more alternatives to the current start up culture. 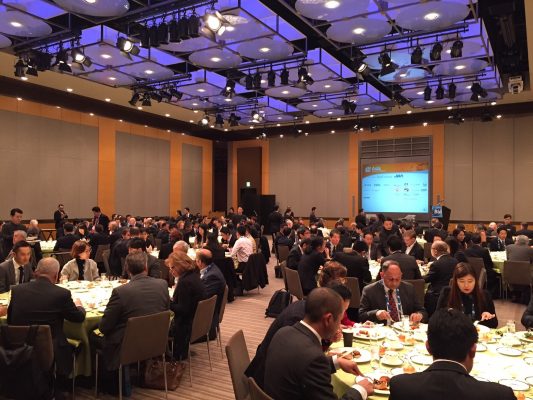 Wang addressed a lunchtime crowd of attendees and discussed biopharma trends in China, as well as what Harbour BioMed has done to encourage innovation. He began by describing his background in immunology and how he came to work in the biopharma industry. He spoke to the importance of altering corporate and national culture to foster and reward innovation. Wang explained that government policy is responsible for setting the tone to encourage innovative programs, and in China, the government has taken steps in a positive direction towards this goal.

Academic institutions in China are getting closer to the investment community, Wang said, but there are still gaps where there is a lack of investment opportunities for research institutions. The system is well established in the US, but it will take time for a similar system to be built in China.

Previously, Wang worked at Sanofi, but he left in 2016 to create Harbour BioMed. He explained the circumstances by which the company was founded as a start up company, and their work in discovering and developing cancer therapeutics. He spoke about the challenges and opportunities the company has faced as a Chinese company that acquired a European company, Harbour Antibodies, in 2016. A truly global company, Harbour BioMed has worked alongside Chinese, European, and American biotech investors and researchers to deliver innovative therapeutics to immuno-oncology patients.

Thank you to everyone who attended! Missed the event this year? Sign up to receive updates about BIO Asia 2018.