October 13, 2015
To understand the safety of food biotech, it helps to look at the numbers. There are thousands of studies on biotech crops published, billions of pounds of biotech foods eaten, and there are zero illnesses (human or animal) resulting of consuming biotech foods.

The sole mission of the International Food Information Council (IFIC) Foundation is to effectively communicate science-based information on health, nutrition and food safety for the public good. The key word here is science-based. Once of IFIC's guiding pricinples is to help consumers better understand science which is why their work is based on the totality of the science.

Read their recent blog here or below showing who says biotech foods are safe to eat. 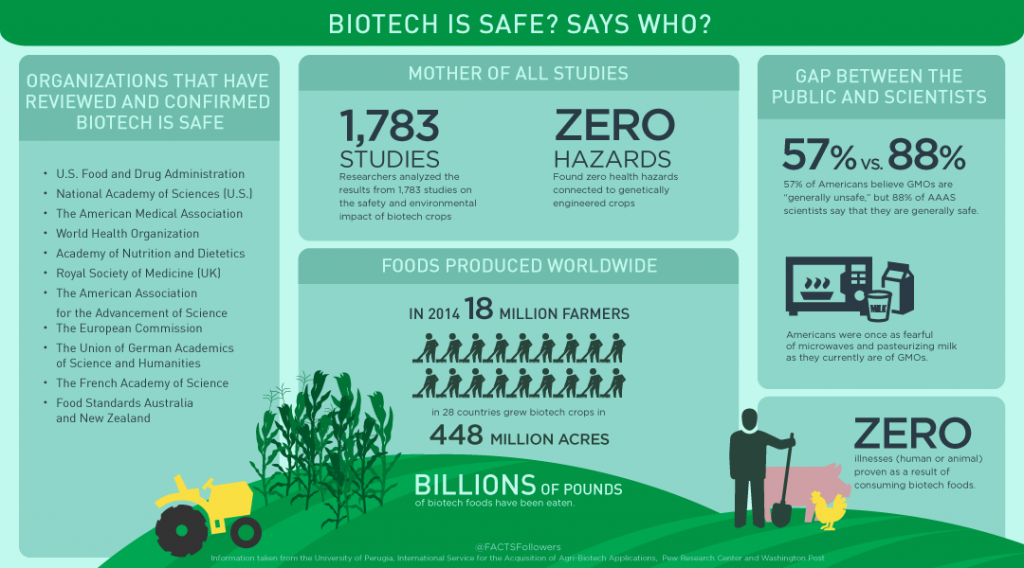 THE MOTHER OF ALL STUDIES

After analyzing a whopping 1,783 studies on the safety and environmental impacts of biotech crops, researchers at the University of Perugia published a paper that summarized their findings. Their main takeaway on biotech safety was that “The scientific research conducted so far has not detected any significant hazards directly connected with the use of genetically engineered crops.” In short: 1783 studies examined, with no health hazard from consuming biotech crops.

A long list of preeminent health organizations have reviewed the safety data on biotech and confirmed: biotech foods safe. A few of the biggies:

And that’s just scratching the surface.

None of this should imply that all biotech foods are the same. Biotech foods are created using different crops, while targeting different specific traits. Though the studies and rulings mentioned above support the safety of biotech foods as a whole, it’s important to note that they are each evaluated individually as well. Each new biotech product is carefully studied and rigorously reviewed for safety by the FDA before it hits the market.

A TRILLION MEALS (AND COUNTING)

Up to 90% of the food consumed by farm animals comes from biotech crops. So there are billions of farm animals in the US who consume billions of pounds of biotech foods (talk about a meaningful sample). This volume gives scientists a pre-existing and vast pool of 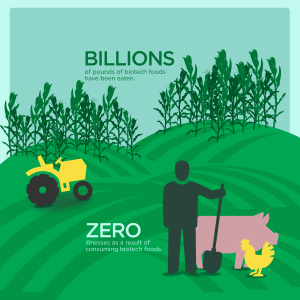 data that they can use to assess the safety of biotech foods.

In a recent study, Dr. Allison Van Eenennaam and her team at UC Davis looked at animal health data that compares trends in livestock health from before and after the introduction of biotech feed in 1996. "Dr. Van Eenennaam found no significant differences in animal health trends between the animals fed biotech and traditionally-bred crops."

The researchers concluded that “these field data sets, representing over 100 billion animals following the introduction of GE crops, did not reveal unfavorable or perturbed trends in livestock health and productivity.” At FACTS, we know it’s always good to look at animal studies with a credible eye. After all, many arguments against the safety biotech are founded on a discredited and retracted animal “study”. But when it’s a well-done study this huge (… a trillion meals), it really says something.

The broad scientific consensus isn't the only thing worth talking about on biotech. There's the postive impacts on the farm; its importance for sustainability and resilience; thedifference it can make in developing countries; the amazing science communicators working on the issue (like these folks and these folks); and even how the big gap between scientists and the public came about (not to mention what we can do about it). There's plenty to say, and we want to talk about all of it with you. The foundational science on the safety of biotech is the first step to opening these conversations.
More on This Topic