February 24, 2016
The race is on to better understand, diagnose and prevent Zika virus. The World Health Organization (WHO) warns that the human and social consequences for the 30 countries with recently detected Zika outbreaks could be “staggering”.

So how could genetically engineered mosquitoes play a central role in the emergency R&D response being developed by the WHO?

Mosquitoes are by far the most deadly animal to humans. Deaths from malaria are the most common cause, killing about 725,000 people every year. About half the world’s population is at risk and therefore has to protect itself using nets, sprays and by taking anti-malarial tablets.

However, it is only females that transmit disease. They need protein from blood to develop their eggs and when they bite they provide the vital link with humans.

While 30-40 species of mosquito spread malaria, one species has emerged as the main carrier of Zika virus, Aedes aegypti. This means a more targeted approach is possible. The species is also a vector for dengue, yellow fever and chikungunya.

Females usually bite during the day, so sleeping under a net doesn’t help. They are particularly successful in surviving in towns and cities, where they can take regular sips of our blood and breed in water that gathers in discarded rubbish. A single female lays batches of 100-200 eggs at multiple sites.

Removing breeding sites is a good preventive measure, bearing in mind only a thimble-full of water is sufficient and that eggs can survive for months without any hatching when rain returns. Insecticides can help too, particularly as the species doesn’t fly very far so infected neighbourhoods can be prioritized.

However, there are around 3500 species of mosquito and most of these are harmless to humans. What’s more, insecticides don’t just kill mosquitoes, but all other insects in the path of the spray. These insects help support the local ecosystem including bats and birds.

Besides these limitations, humans have not proved terribly effective at finding and killing this species. When trying our hardest, we have only managed to reduce its population by 30-50%.

As we only really need to kill females, there is nothing better at finding them than the male of the species. His physiology is finely tuned for distinguishing the females’ wingbeat from males and from the fairer sex of other species.

The Oxitec technology hijacks his female-hunting skills. Scientists have genetically engineered males so that they pass on two additional genes. One is a self-limiting gene so that his offspring die before they’re able to reproduce. The second is a marker so that the fate of offspring can monitored. 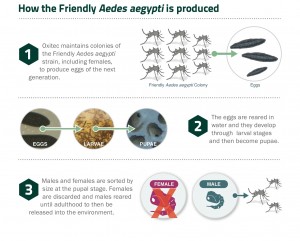 As the technology - borne out of academic research at the University of Oxford - has undergone successful trials since 2009, it is ready to be scaled up. Every trial has shown it to reduce the wild population of Aedes aegypti by over 90% in just six months. Millions more males can be bred in months.

The WHO recognises that vector control is an essential part of the current fight and that Oxitec’s technology is a non-toxic, “promising option”. Genetically engineered male mosquitoes have proved much more efficient than chemicals, and just as cost effective, at controlling the population of biting females.
More on This Topic