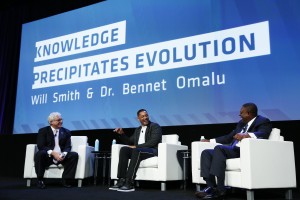 Tuesday morning at #BIO2016 kicked off with an exciting keynote panel featuring Will Smith and Dr. Bennet Omalu. As attendees filed in to take their seats and pack the Esplanade Ballroom in the Moscone Center, palpable anticipation permeated the air.

Dr. Bennet Omalu is a Nigerian-American physician, forensic pathologist, and neuropathologist who performed “the autopsy that changed football” on Mike Webster, a former NFL player. Will Smith is an actor, producer, musician and philanthropist who portrayed the doctor in the 2015 biographical film “Concussion”.

Smith and Dr. Omalu’s on stage chemistry brought a delightful levity to the heavy scientific issue of the progressive degenerative disease that Dr. Omalu discovered in Webster and dubbed Chronic Traumatic Encephalopathy (CTE). Attendees could easily tell that the duo had an established rapport; a likely result of Smith’s immersive technique in preparing for his portrayal. Smith declared that he was hesitant to star in a movie opposing football and the NFL but could not resist after meeting Dr. Omalu. Smith said “As you can tell, Dr. Omalu is a very colorful person, and for an actor that is like meat. I could not wait to portray him.” In preparation, Smith watched Dr. Omalu perform four autopsies. “It’s beautiful to watch that much care and concern for the transition of this being into the next life. That’s when I got a really good hook into a man of science who is also a man of spirituality, which normally would be conflicting, but he finds this beautiful way where they go together seamlessly and powerfully,” said Smith.

Dr. Omalu shared his own personal struggles with depression during his second year of medical school. It was that experience which allowed him to identify with Webster and to continue his fight for the truth. He confessed that he sometimes wished he never met Webster but it was his special relationship with the bodies on his table that helped him persevere, not to mention the promise he made to vindicate Webster.

“My faith and my science go together”, Dr. Omalu explained, “science is the search for truth through the scientific method but the more you search the more you realize how much you don’t know. It is faith that gives you the strength to keep searching.”

Smith’s portrayal of Mohammad Ali in the 2001 drama film ‘Ali’ sparked an interesting shift in conversation. Ali had been diagnosed with Parkinson’s disease at the age of 42. While the medical community is debating whether or not boxing had caused the disease, Dr. Omalu shocked the crowd by announcing he did not believe that Ali had Parkinson’s at all. He believed that the hundreds or thousands of head traumas he suffered had caused Parkinsonian symptoms that were in fact a result of CTE. The doctor explained that he has seen many examples of patients that had been diagnosed with Amyotrophic Lateral Sclerosis (ALS) and Parkinson’s disease, who, upon autopsy, exhibited anomalies in their brains that were more in line with CTE. One issue surrounding CTE is that it can only be diagnosed during an autopsy. This was touched upon during the Brain Health session titled “Sports-Related Brain Injuries: Is it Safe to Play?” on Monday evening. This session provided a more scientific and comprehensive breakdown of CTE and the diagnosis, treatment and prevention of concussions.

Dr. Omalu’s lifelong work on CTE and Traumatic Brain Injuries (TBI) had inspired members of the community to found The Bennet Omalu Foundation which is dedicated to advancing the humanity of science.

In closing, Smith left the audience with this sentiment about making advances in any field: “If you lay down one brick a day, you will eventually get a brick wall. I learned to visualize the wall but to focus on laying down one perfect brick at a time”.