October 17, 2012
As we celebrate Food Day 2012, it seems the debate around agriculture and food production is more contentious than ever.  Instead of celebrating our abilities to provide for seven billion people on our planet in ways that are more sustainable and productive than ever before, there are still some who want to ridicule our modern food production system. 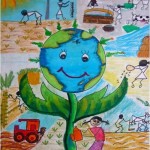 Agricultural biotechnology – one of the most basic tools helping us to better feed, fuel and heal a growing world – always seems to draw controversy, despite its twenty years of commercialization and proven success.

A recent article in the Chicago Tribune points out:

For more than a decade, American farmers have planted corn seed containing modified genes that resist crop disease, combat insect pests and make weedkiller more effective.  Generations of livestock have been raised on genetically modified corn. Millions of Americans have consumed it too, in cereal, cooking oil and related products.

If genetically modified corn posed an urgent health threat, America would know it by now. In fact, the science behind these crops not only is safe, but transformative.  Agricultural biotechnology has reduced the amount of chemical pesticides and herbicides in use.  It has improved yields.  It is making important contributions to the relief of global hunger, especially now that advanced tools are being used to improve cassava and other foodstuffs vital to subsistence agriculture.

The benefits of agricultural biotechnology have long been supported by millions of farmers around the world, and documented in hundreds of scientific studies.

And now the scientific community is pushing back on “junk science” and bad reporting that is misleading readers on current debates such as
food labeling, herbicide use and coexistence between organic and biotech farmers.

However you feel about any of these issues, one thing that is not in question, is the safety of biotech foods.

Despite the well-known benefits of biotechnology (environmental, socio-economical, productivity), we have plenty of work ahead to meet future challenges such as providing for a global population of 9 billion people in 2050 with less farm land and the uncertainties that come with climate change.  Food science and technology will be the solution to these future challenges.

Take for example, the potential of drought resistant crops on which
the Wall Street Journal reported:

With the Farm Belt recovering from one of the worst summers of drought in decades, the companies that supply corn seeds are rolling out new strains that can survive with less water. It's a wide-ranging, big-budget battle covering a lot of fronts, from crossbreeding crops to tinkering with the plants' genes.

There is no magic bullet, researchers warn. But even incremental gains could have big results, given the size and importance of the corn crop.

In the growing area of animal biotechnology, research has yielded:

Unfortunately, as the Los Angeles Times reports, the process for getting government approval to sell food derived from genetically engineered animals appears to be a hopeless logjam.  In frustration, more than 50 scientists and biotechnology leaders sent a letter to President Obama last month asking him to urge the FDA to move forward on the AquaBounty salmon decision.

As we celebrate Food Day, we all have a responsibility to be good communicators, good educators and help everyone learn about the importance of science and technology.  We all need to push back on those who hold back progress and turn a blind eye to hunger and malnutrition.

To illustrate the importance of food science and technology, the Institute of Food Technologists has launched the “World Without Food Science” campaign. This video campaign includes a provocative public service announcement that shows what happens in a grocery store when there is no food science. Expert interview segments focus on how food science makes it possible to make food globally available and also how the profession makes it safe for consumers.

Most of all, World Food Day generates an opportunity to offer a science-based perspective on how we can meet the challenges of hunger head-on to help all those without access to safe, nutritious food-now and in the future.
More on This Topic